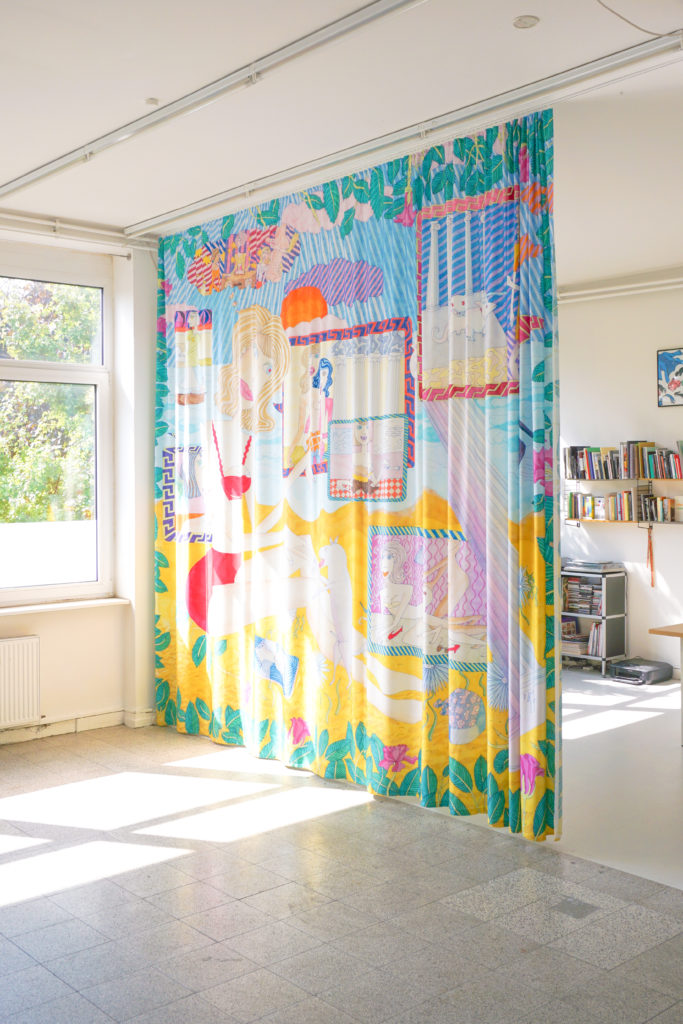 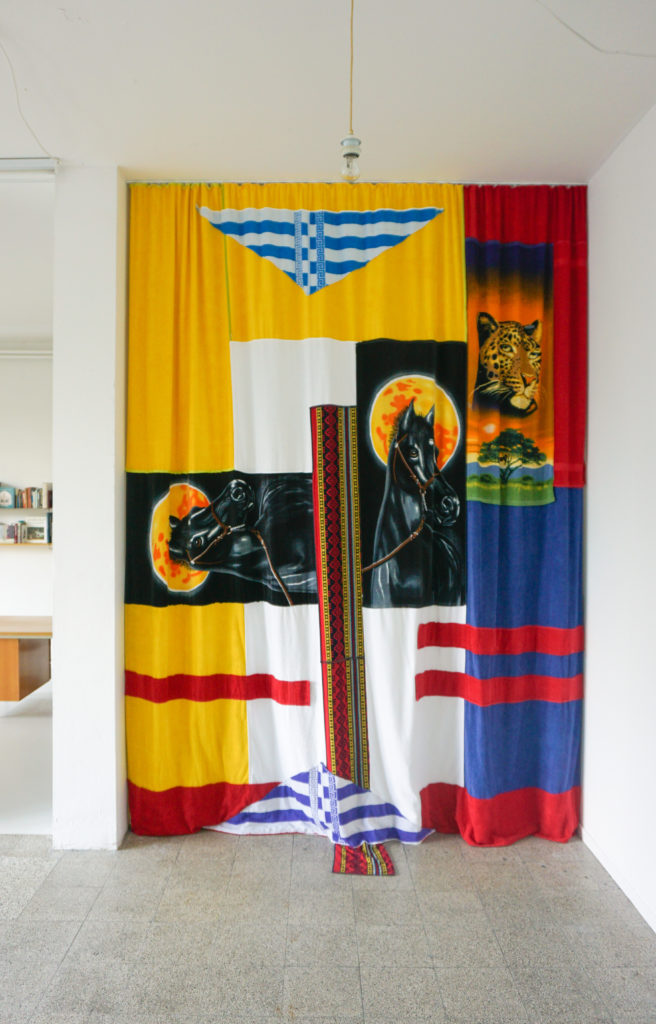 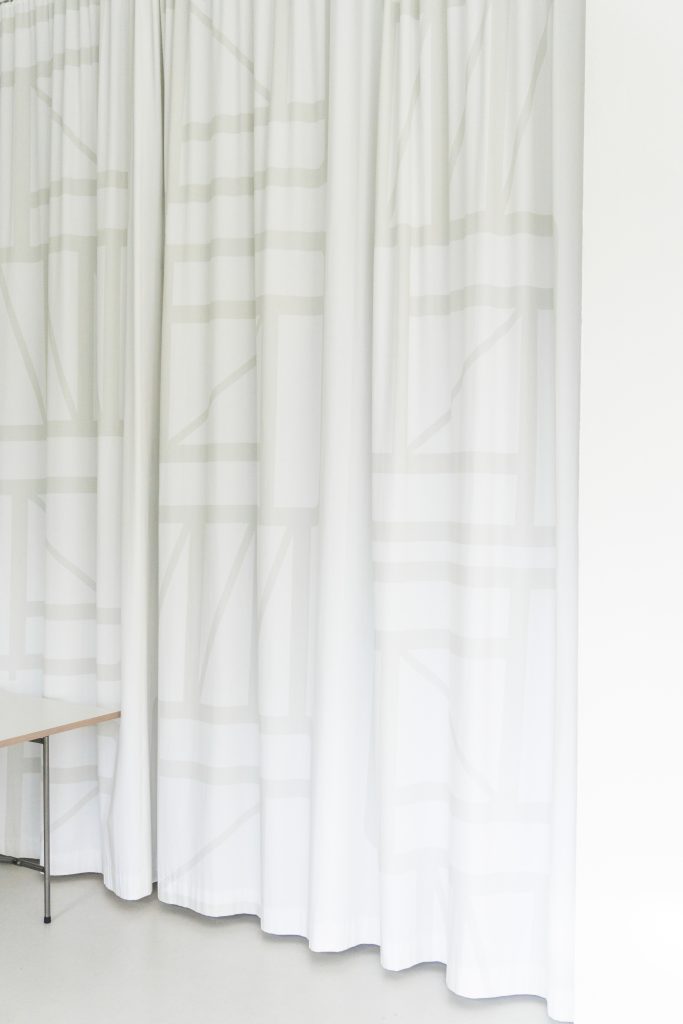 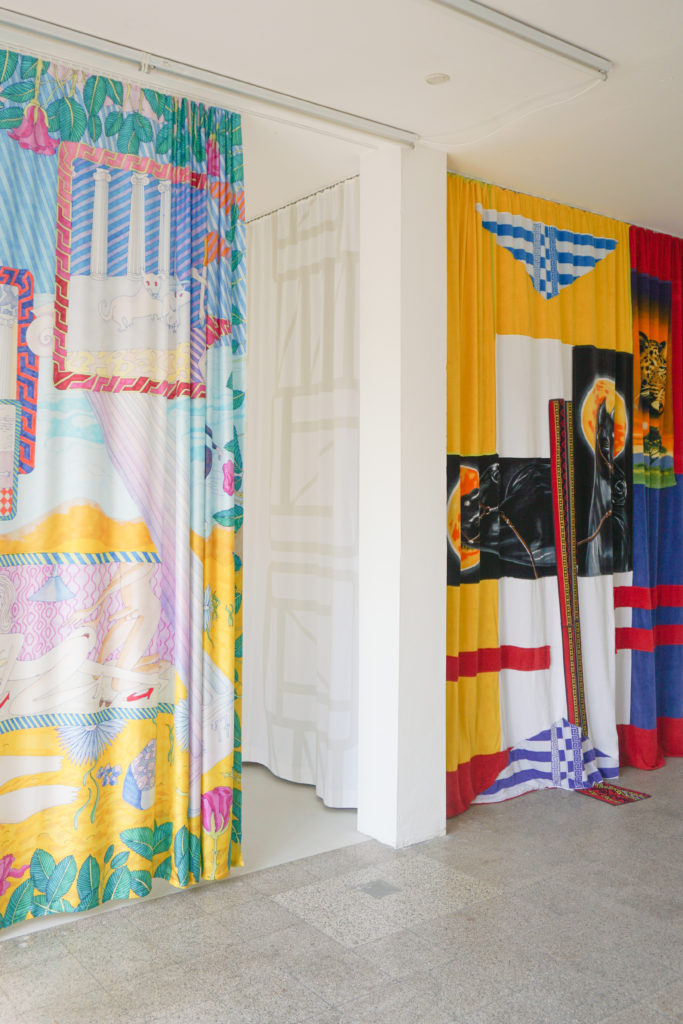 Launching on 31. August, we present three newly commissioned curtains by the artists Magdalena Kita, Sophie Macpherson and Eleanor Wright. The new works in-situ are conceived as a site-specific response to the new location of Drop City in Düsseldorf – the workplace and home to two of Drop City’s co-founders: artist Eleanor Wright and exhibition maker and designer Sam Watson. Manifesting on only an occasional basis, the programme will take place against a backdrop of the live/work space and an evolving personal collection of accumulated objects and artworks. Each event or presentation will provide a different temporal experience, a different intensity and a different possibility for interaction. The partitioning curtains will form an adaptable framework for the upcoming programme, enabling the space to freely transition between a living, working and showing environment.

The invitation to each of the three artists to create a curtain is an attempt to make public the divergent approaches and individual networks at play within Drop City that lead to working with artists in our programming. The work of Köln-based Magdalena Kita, Berlin-based Sophie Macpherson and London/Düsseldorf-based Eleanor Wright shares common sensibilities through its exploration of both two and three-dimensional form, space and materiality in relation to human experience.

Together with the preliminary exhibition Warming up at Petra Rinck Galerie, the invitation creates a dialogue between the works, offering a new perspective on all three artists, each of whom, though strikingly different in their approaches, examine questions related to the context in which their works are shown while addressing wider art historical debates on the politics of form.

The curtains serve to create a new space within the space, and to frame the other pieces on display including the artworks and objects we live and work with daily, playing on a long-standing assumption that décor is only ever an accessory. Lierenfelder Strasse 39 is not an exhibition space as such but, rather, plays host to numerous events and occurrences that typify both Drop City’s and Wright & Watson’s social approach to the production and presentation of art.