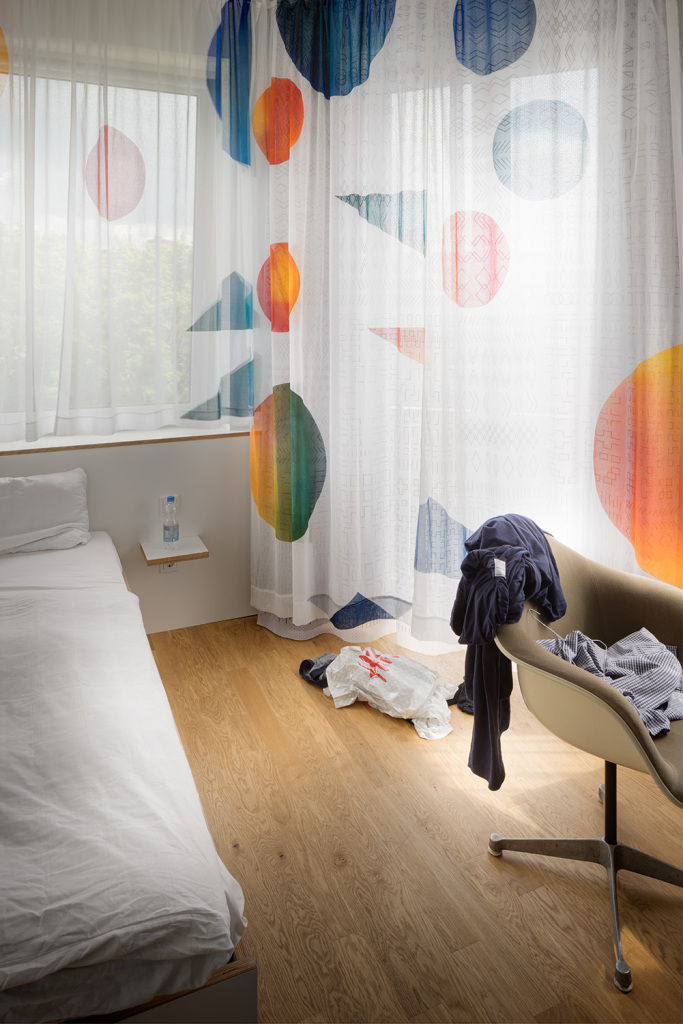 Roßstraße 68 (learning from Ella Steigelman) is a light responsive work informed by the coloured glass windows of a municipal building in Düsseldorf and the workbooks of the 19th Century pedagogist Ella Steigelman.

Since the Summer of 2015, the former municipal tax office on Roßstraße has been used to accommodate refugees fleeing from the middle east. It is also used as temporary studios for art students while studios of the Kunstakademie Düsseldorf undergo renovation. This unlikely context is where Wright worked for six months with her studio directly looking out onto the communal courtyard where adults and children gathered to talk, smoke and play. Long benches and palettes have been supplied and are continuously reconfigured into forts and daring obstacle courses, echoing the European ‘Junk Playgrounds’ of the post-war era. The children have claimed the communal courtyard as their own; a way of acclimatising to their new home city.

Ella Steigelman was a founding member of the California Kindergarten Training School and a leading proponent of Frederick Fröbel’s progressive ideas on educational reform. Fröbel’s system departed from traditional methods of schooling by emphasising things rather than words, and doing rather than talking or memorising. Here patterns are re-produced from one of Steigelman’s embroidered workbooks (produced in 1890), which contributed to a system of nonrepresentational objects and materials that aimed to develop recognition and appreciation of natural harmony. These early exercises in abstraction and pattern making paralleled many of the activities adopted by progressive schools of art and design in the early twentieth century.

Roßstraße 68 (learning from Ella Steigelman) considers the 19th and 20th Century histories of educational reform and learning through play through the lens of a 21st Century crisis. The legibility of the coloured shapes and text patterns shift throughout the day and according to different weather patterns, the work both having an effect on and adjusting to its environment. Accompanied by this text and situated within a bedroom of Hotel Ufer–sharing the same neighbourhood as the building on Roßstraße–the work tunes into the temporality of different guest’s fleeting relationships with the city.

Wright’s practice is rooted in the exploration of specific histories, buildings and sites, resulting in choreographed, sculptural assemblages that set out to make visible the relationships between people and their environments, whilst considering the rich history of the exhibition as form and various frameworks of presentation. She sees her works as parallel progressions moving through a constellation of distinct formal problems. Remodelling objects and environments into forms and symbols using a spectrum of techniques and materials – Wright generates a pluralistic, sculptural language that reflects a holistic attitude towards art and wider cultural society.